Studying the theme of feasibility

Rule for Mines - as well for Railways (como cualquier kiosco)

The situation of the National State. Just now the people are suffering need and hunger, and because of its social responsibility the state has to inject economy in some way.
That gives options for Railways - or - the Railways give options for the state.
Uniting the two needs: Create employment by construct a railway as the mines need.
That combination seems as an ideal option to relieve a difficult situation for the state.
Once established, a railway system of cause will be at disposition for use of anyone in the society.   NO monopoly - please -

The situation for the mines is, that they need to establish an access to their oversea markets to be able to create flow - and only with that, they can exploit their concessions and produce. The same flow is able to pay a railway - or the mine will not be established.
In this way, the mine railways of Apurimac-Marcona together with the mine railway Cajamarca-Bayovar are both guaranteed a feasibility by the flow from the mines. The same day of inauguration the mines will be able to send off their first train

The proposal of Pusac is valid for mine railways. The feasibility of railways for common freight and passengers will depend of their use and the frequency.
Any other railway project without mines - have to fight to conquer a flow, because the actual existing flows are until now moved by trucks and buses handled by other transport operators.
A way out of that dilemma is to invite the truck and bus owners to use the rails - to move either their trucks onboard a rail wagon, or the bus and truck owners can purchase their own trains and motor wagons.
Strategy: "If you can't beat them - then join them."

Strategic considerations around some railways

Peru has few railways, but many railway projects - railway dreams - modestly registered by MTC (the Transport Ministry) on their map.

Some of the more interesting railway projects:

1): 'Train of outskirts' is going out of Lima and northwards along the coast.
2): 'Train of outskirts South' is going out of Lima and southwards along the coast
3): Prolongation of 'FC Central' to Cusco, passing Huancayo, Huancavelica, Ayacucho and Abancay
4): Pucallpa connected with Lima over either 'Cerro de Pasco', 'Tambo del Sol' or Tarma /Oroya
None of these projects bring their own feasibility from any mine. But nevertheless, that could be a good idea to establish some of these lines of strategical reasons to join the country - and in combination with the Covid situation create employment.
electric trains means too electrification 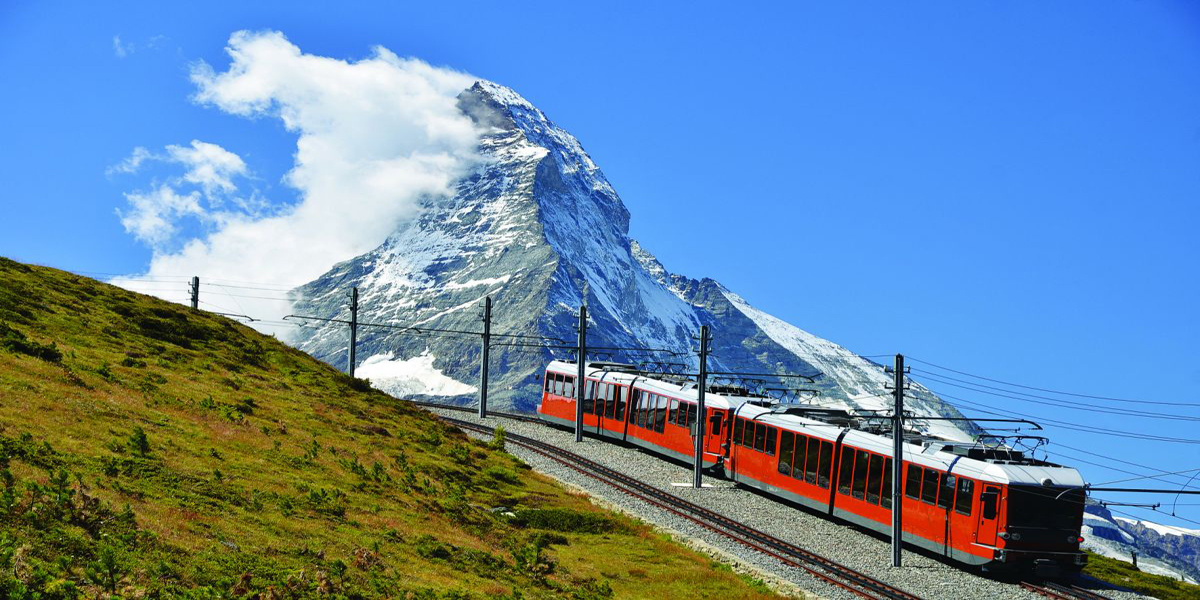 Of course there is a need for "Tren of outskirts", a railway as is going out of Lima against North and South - but - - -
On the other hand, Lima has always existed without such train, and of course Lima can go on without.
The real problem of Lima is the port of Callao, as during the years has been encircled by the metropolis of Lima-Callao - encircled in a way as doesn't permit the flows to and from the port to pass the city in a swift way.
The port of Callao is still the principal seaport of Peru and handles for example 2-3 million TEUs of containers each year, as all have to pass out through the congested streets - by trucks. No container is passing by train. The port of Callao is locked up.
If the authorities can't resolve an access and transport between the port and the country of Peru, a solution could be to create satellite ports = subdivision of Callao port - as for example Chancay 80 km at north and Pachacamac 40 km south of Callao.
Such two satellites could relieve the press on the streets of Lima-Callao and by the highways outside Lima permit a connection with the country of Peru.
In such case too the "Tren de Cercania" may be of great value for Peru, escaping the need to pass the roads through the congested centres of the city Callao-Lima. This is more a question of urban planning, strategical considerations and decisions - but a railway is a clear option. Of course the south going line of this railway in the city of Nazca should be connected to the future Apurimac-Marcona railway.

Any connection of new railway lines to the old 'FerroCarril Central' will put a focus on the bad preserved state of FCC.
Any new line should be able drive through with 80km/h and 160km/h - respectively for cargo trains and passenger trains.
This make necessary a new - or at least a corrected - route to give a speedy run-through by removing some bottle necks.

Hundred years ago the old Central Railway was constructed, and nobody has cared to modernize it, why it now is degraded and obsolete - but still in use. It serves only the last mines in the mountains over Lima. It has no importance for transport of persons nor goods, and Lima has in fact lost its only railway.
The poor condition of this old-timer railroad has as consequence, that any extension as may be wanted, raise the urgent need to renovate the old railroad, and upgrade it to a higher level of service.
Zigzags and turntables should be eliminated - at any railway

The City of Cuzco is declared a UNESCO World Heritage

- but furthermore is the capital of the HIGH plateau - the table-land
A railway Lima-Cusco is an old dream. It has always been seen as a prolongation of the central railway from Huancayo, passing the rail route of 'Tren Macho', and from the railway station of Huancavelica passing over the main cities of Ayacucho, Abancay and to Cusco.
That is a dream, an old dream, but a nice dream.
Once terminated the new airport in Chincheros, our vision is to convert the old airport of Cusco to a cargo station (a ZAL = Zone of Logistic Activity) to serve the high land plateau between Cusco and Titicaca together with the low land regions the rainforrests to North and East.

A railway to the Rain Forest

Looking at the map of Peru, we see that the country is divided in two. One half (the costal part) works in "normal" way with roads, highways, some railways, electricity and communication etc - whereas the eastern half is rainforest, as is serviced by boats on navigable rivers.

The task of a transport ministry is:

There are no roads in the rainforest! 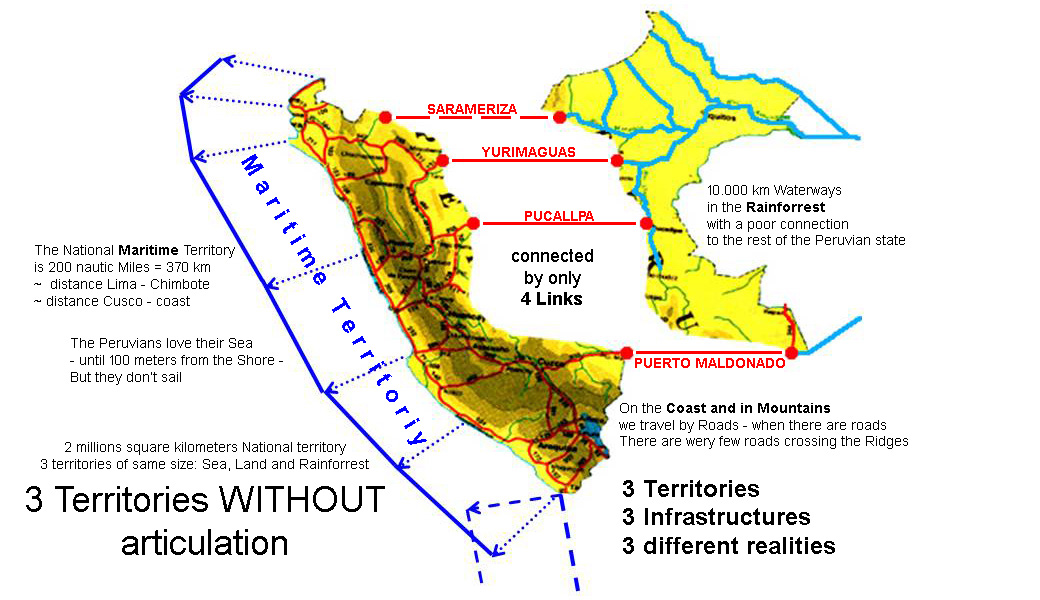 For the RAIN FORREST it is easier to export by rivers to the Atlantic Ocean -
To send their production through the mountain ranges to the Pacific Ocean is difficult in any sense
The distance Pucallpa-Lima in straight line is 500km - by road 800km   -   and it takes 17 hours by car
[ Link: www.pusac.org/Pucallpa-21-UK.htm ]
The river system is impressive. 10,000 kilometres of navigable rivers, as are united in a tree formed structure, where many of the branches meet the trunk somewhere down in Brasil. That works, but that doesn't works well.
A problem is the weak connection with the mainland. 4 connections are shown, but as Sarameriza doesn't work and 'Puerto Maldonado' not is much port, but more a land-connection to Brazil, then we have only two valid connections. The northern of these is Yurimaguas as mostly is an export harbor connected rather directly to the ocean port of Paita - whereas Pucallpa is considered as the port of the rainforest. What it really is, except that there is no port in Pucallpa - they land on the shore of the river.
As gate to the tropical rainforest - Pucallpa is the commercial centre, doing the administrative business service and is "factory" for all the rainforest, processing their raw materials, as are wood, fruits and animals - and too medicinal plants inc. coca leaf and derived.


To give Pucallpa a new connection could be a wise idea
A railway to Pucallpa is NOT urgent,
because Pucallpa exists as a gateway to the Amazon lowland and can go on so -
But of pure strategical reasons, that could be a clever thing to join the divided country -

Lima is the main market for the Rain Forest - and Lima too is the administrative headquater of the nation.
The proposal of PUSAC is to make a better connection between the gate of the Rain Forrest (Pucallpa) and Lima. That means to connect the two main lands of Peru with a stronger link: A railway as can take over and ease the heavy flow, as exists.
We are not aware of any study, neither technical nor commercial of such a connection, and we too know that we need to pass some years after construction to gain our part of a flow to obtain feasibility - to turn the flow from trucks to rails.
Nevertheless, we of strategical reasons recommend: To unite Peru, as the Constitution §43 demand: "The State is one and indivisible."

Some common rules to consider

Railways are infrastructures - trains are not

By definition: "Infrastructure" is ALL as connect a country, and therefore infrastructures should be responsibility of the state.
Any type of infrastructure as land roads, river roads y and seaways as well as navigable lakes are to consider as a traffic backbone interconnecting the country.
Infrastructure we understand equal important as any strategical company + the armed forces, the police, the curt of laws, and the public administration etc.
The use of this type of infrastructure should be for ALL the population and should therefor NOT be given in any private concession Purchase of rolling stock IS NOT the responsibility of a government!
One thing is infrastructure, another is the vehicles, the vessels and the crafts running on the infrastructure.
- the general traffic of wagons, cars, buses, trains, locomotives, trucks, boats or yachts on any piece of infrastructure could be property of any
Klaus Lynge
EUR ING
1): Each mine could purchase their own locomotive and its wagons
2): The mines could join and create an "United Freight Operation" as maintain their own locomotives and wagons
3): The mines could contract a transport company, as come with his locomotive and haul the miners' wagons
4): The mines could give over all transport to a transport company
5): The communities, regional or local governments or regional could administrate companies with own wagons, etc.
Pusac web - updated December 2022